Despite living only a couple hours from the German/French border, we honestly have not spent a ton of time in France. I've been to Paris a couple times, and we've done a few day trips (mostly when we have guests) to Strasbourg near the border. But we decided there were some sites we really wanted to see before we leave Europe, and our summer vacation ended up being a week-long road trip through France! 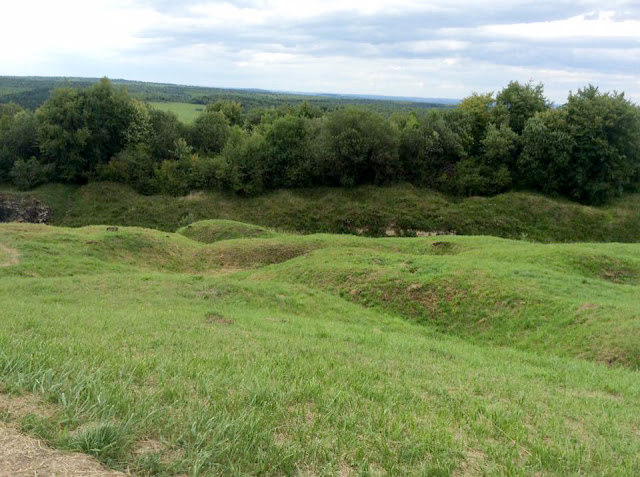 We started in Verdun, one of the World War One battlefields. It had been high on our list of historical spots to stop at, and we spent two nights there. It was primarily a front line fought by the French and Germans, site of several destroyed villages, and intensely sad to realize the loss of life. The memorial museum and two forts we visited were very well done, and there were stretches of trenches that had been preserved. We had read it was a good place to stop and get out of the car to hike a bit through the wooded areas to get a better sense of the breadth of this conflict, and it was: there is a lot of places tucked away in the woods that aren't visible driving down the road. The saddest moment was visiting the Douamont Ossuary; a vast cemetery and monument to the fallen.

After Verdun, we headed to the Normandy region to visit Bayeux and some of the D-Day invasion landing sites (do you sense a trend in this trip? Both my husband and I are big 20th century history nerds, with a particular interest in World War Two.). Bayeux is gorgeous--I don't think I was prepared for how stunning the cathedral is! The cathedral as it stands today was built in the 12th century (with additions and modifications up through the 19th century), but the site is much older. Personally, I found it a lot more beautiful than Notre Dame in Paris; we spent quite a bit of time walking through the interior.

There was also a cute little brocante across from the cathedral, which I was drawn to like a moth to a flame! I picked up a stack of early 1950s Le Petit Echo de la Mode that were only a couple of Euros each. (Such a better price than the Paris flea markets!) I'll share some more inspiration from the pages in the future. 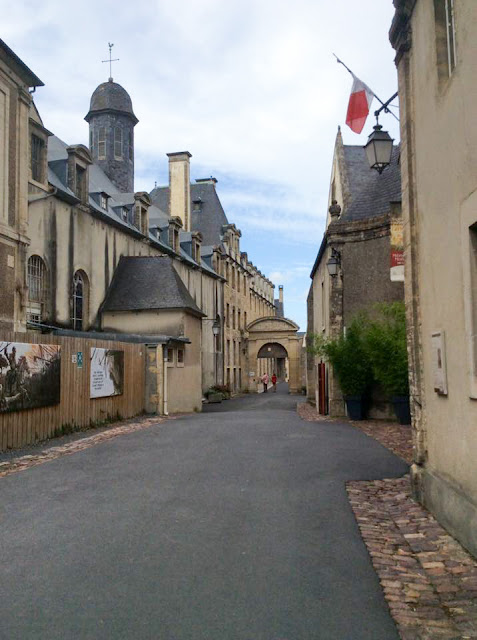 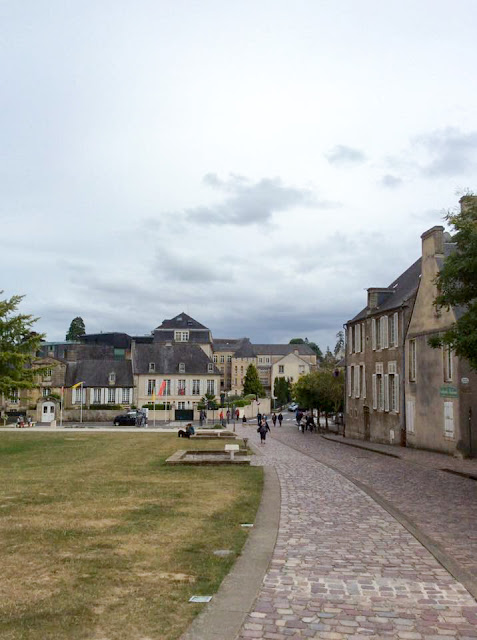 Of course we visited the Bayeux Tapestry museum while we were there! Partly we both wanted to see it, and it's my sister's area of historical interest and I knew I could get a little Christmas gift shopping out of the way in the gift shop! I can't recommend the museum highly enough; the audio tour was excellent as you walk through the tapestry area. (Though Mr. P. started fussing halfway through, so I ended up having to take him out and left my husband and Miss A. to finish!) 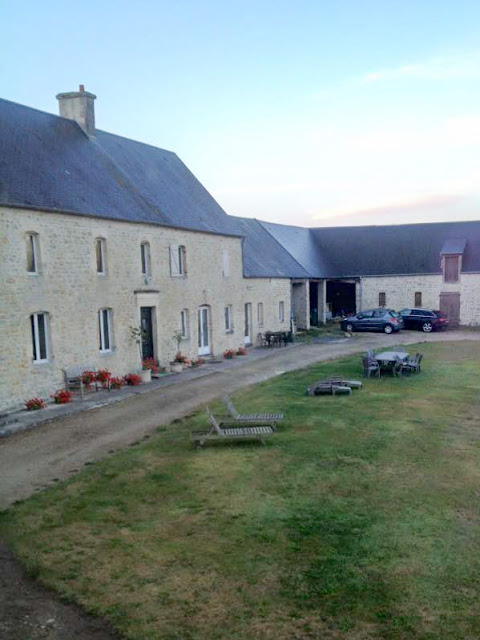 We stayed at a beautiful, incredibly old farm bed and breakfast just outside Bayuex. Our hosts were so kind about the occasional chaos of having two small children there (especially the morning Mr. P. grabbed my full coffee cup and spilled it all over the table!). The farm was established in the 1200s as a hospital. We stayed in one of the apartments in the outbuildings, but had breakfast in the main house every morning (a traditional French breakfast--just the kind I like! Lots of bread, pain au chocolat, and coffee!) and our hostess made us a delightful Normandy dinner one evening! (Sadly, I didn't get a chance to sample the local brandy--Calvados--but we did bring a bottle home!) 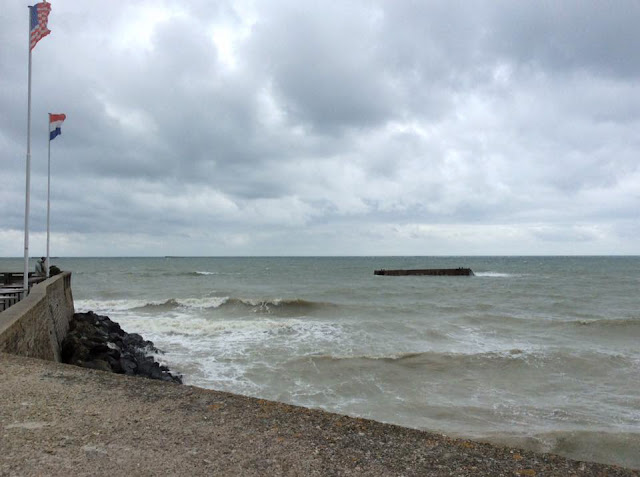 The purpose of our stop ultimately was to  visit several of the landing sites. We stuck to the US landings, simply because we didn't have enough time to include everything. We started out at Arromanches les Bains--the site of the temporary port the Allies put in after the landings. Many of the ships/barges/landing craft they sunk to construct a breakwater are still visible. The town itself is very picturesque--if not a little touristy. But a fun way to spent a couple hours!

Next we visited some of the remaining German batteries and bunkers at Longues-ser-Mer. It was perhaps the eeriest WWII spot we stopped at on our trip; it looked like everything had stopped in time 73 years ago. We were able to go inside the bunkers--many of which are still in excellent condition--which was fascinating to see how they were constructed. I believe I also read online that this is where they filmed some of the German bunker scenes for The Longest Day. 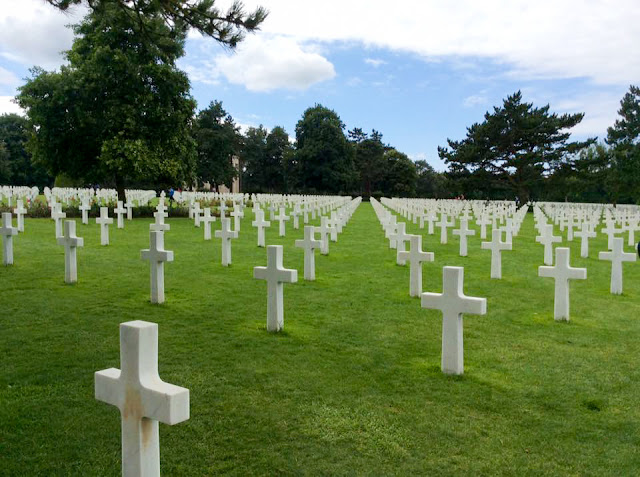 We stopped at the American cemetery overlooking Omaha Beach. It was highly sobering. I don't know what else to say--what can you say when faced with so much loss? I feel very fortunate we got to see it though, and it meant a lot to my husband being able to pay his respects to those that fell.


The direct beach access from the cemetery was closed due to security concerns, so we drove a bit down to the road to stop at the actual beach. Nothing remains to give you a sense of how things looked in 1944 (though there are some informative posters up around the parking lot we stopped at with images of the beach in the late 1940s/1950s). We walked down the beach a bit and the kids played in the sand and tide pools. This was Mr. P.'s first time at the ocean, and he loved it! 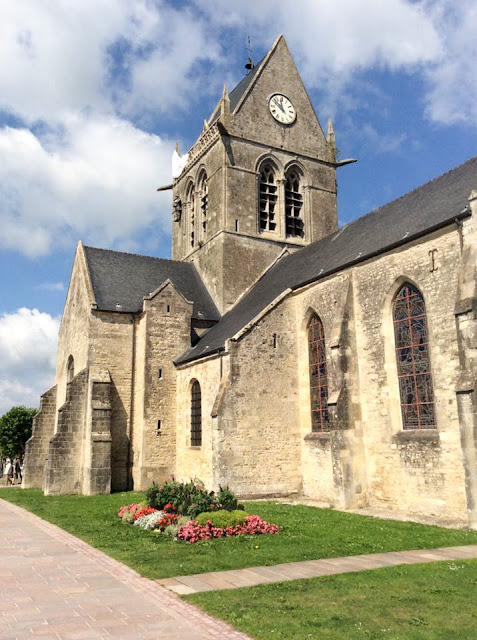 The next day we drove to Saint Mère Èglise--probably the most famous site of the paratrooper landings just before the D-Day invasion on the beaches. The town is really touristy and a bit hokey (they have a paratrooper statue hanging on the side of the church in the town square), but the Airborne Museum there is excellent. We spent a few hours there and then grabbed lunch at a boulangerie around the corner (pretty much our standard for the entire trip--a great tip on keeping costs down while traveling through Europe! Bakery lunches are the best, in my opinion.). 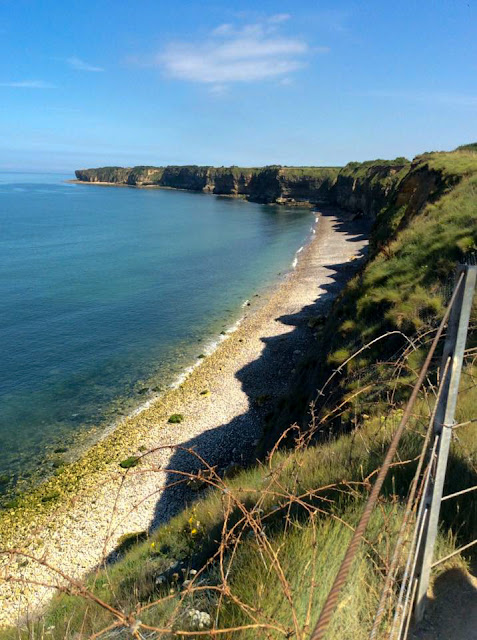 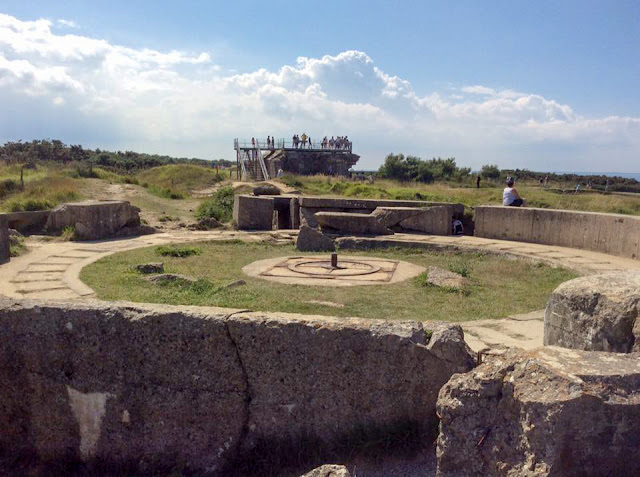 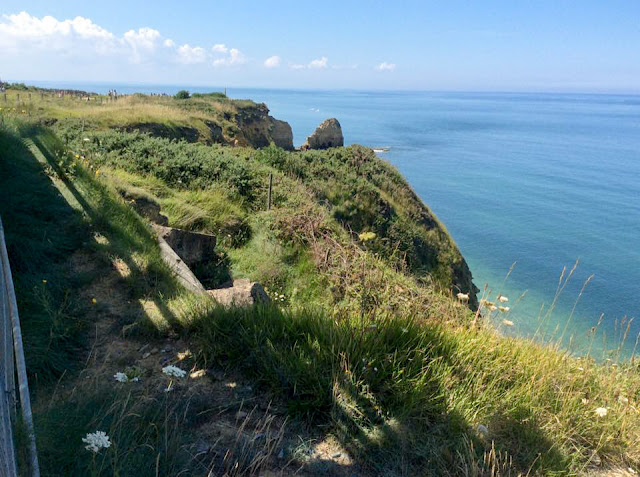 Lastly, we stopped at the Ranger Memorial overlooking the Point du Hoc landing area. The cliffs and water was breathtaking, but behind us were more reminders of the defenses the German's had erected.

On the way out of Bayeux, we made a run to one of the French hypermarkets--in this case Carrefour. Lots of wine was bought (I have a weakness for rosé), some groceries, and importantly ready made savory crepes so I can replicate the ham/cheese/fried egg galettes I am addicted to! (I also picked up some of the buckwheat flour to made crepes once the package of ready-made runs out. We'll see how that goes--I haven't tried to make crepes in years!) Sadly, I couldn't stock up on cheese since we were stopping overnight in Reims rather than driving straight home (I also didn't have a cooler). But my local German supermarket carries one of the popular brands of Camembert, so I'm not too badly off!

I'm very glad we're back home, in our own beds again; but it was a trip I don't think I'll ever forget!