Refashioning was one of the major topics on Elegant Musings way back in the day (like 2007/2008), and is still a favorite subject to revisit! I love to take a reject garment (whether it's from my own wardrobe or the thrift store--bonus points if it's--what I call--a "super reject" from the clearance section of the thrift store!) and reimagine it in a way that might be totally different from it's original form, but breaths life and purpose back into it.

I've had this top in my wardrobe for years (pretty sure I thrifted it in Florida), and it's done a decent job in my closet as a sensible, summer staple. But it's always been a size too big, and gaped a bit at the armholes (annoying). The past few summers I've also been a bit gaga over crop tops, and kept getting an idea to chop a few inches off this top and redo the problematic armholes (honestly, I hadn't worn it in a few summers!). 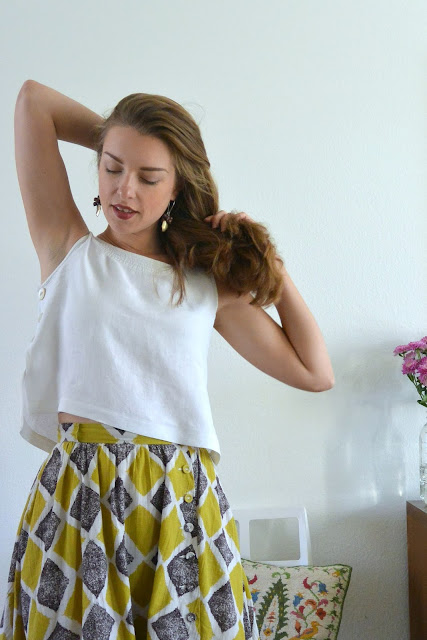 So I did! (Because ideas are like an itch--sometimes you've just got to "scratch it" otherwise they don't leave you alone!) I really love how the "new" top looks--far more fitted than previously. Rather than take in the sides, I opened the original seams and overlapped for a bit of an angle at the sides and to flare the silhouette a bit. To that I added buttons for some visual interest (and I have way too many mismatched buttons in my box, so I'm always looking for ways to use them!). I took 3 1/2" off the bottom edge and turned it up for a breezy cropped look.

Super simple refashion and took me about an hour! I did document how to do this (click through to read), in case anyone is interested. I know summer is almost over for some of us--but it's right around the corner for others!

If you'd like to refashion a top in a similar manner, I recommend starting with a fairly boxy, dartless shell like the top I used. Mine was a size larger than I normally wear in "group" sizing--like small/medium/large; if you are using an individual sized top, 1-2 sizes up should do the trick. You want something that has at least a couple inches you can work into the overlap at the sides, while resulting in a top that still has wearing ease. 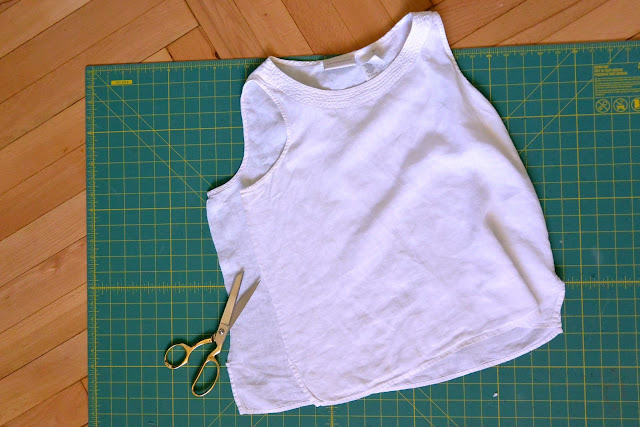 Begin by taking apart the side seams. My top had serged seams, so I cut the seams apart and trimmed away the seam allowances. But if you can use a seam ripper and preserve the original seam allowances, do so! 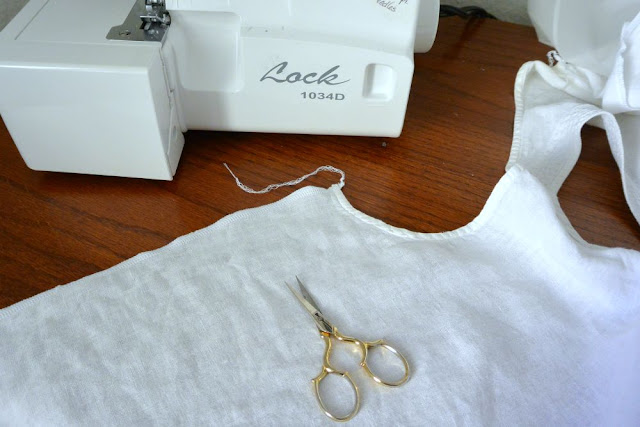 Press everything and finish the newly raw side seams. I serged these, but you could use a zig zag stitch, or instead of a single turn-under (as I'll show below), do a double turn to encase the raw edge. 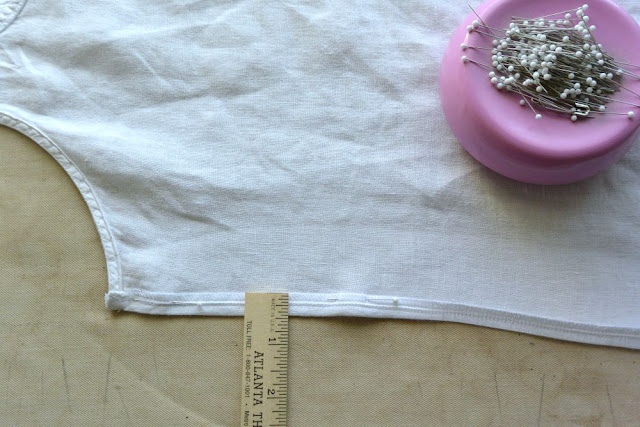 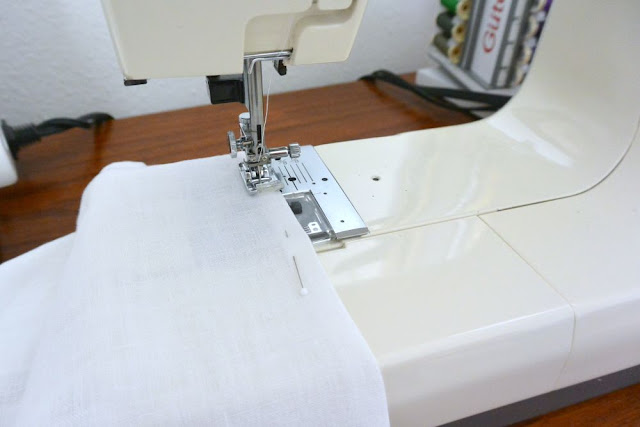 Turn under each side seam edge 1/2", press and pin. If you have an unfinished edge, turn under 1/4" and press, and then again 1/4" to enclose the edge neatly. Press and pin. Stitch about 3/8" from the edge (1/8" for the 1/4" baby hem), starting at the bottom edge and ending at the armhole. Repeat for all side seams. 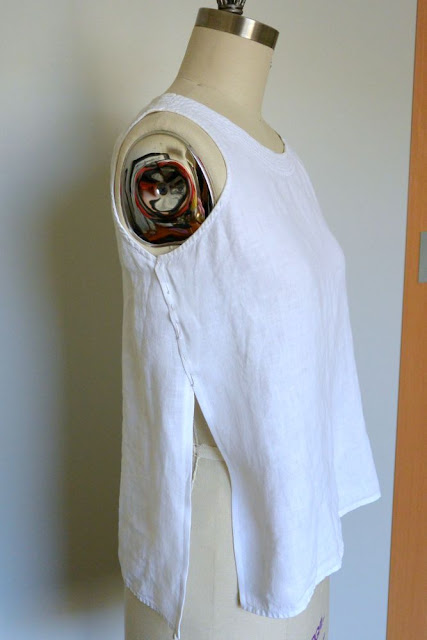 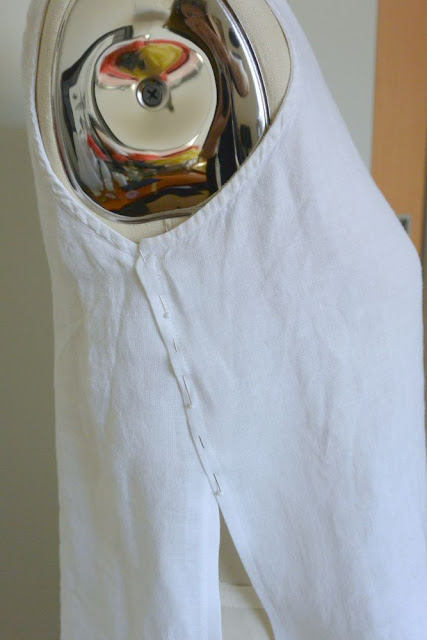 Next try on the top (my trusty dress form--Ava--is modeling today), and overlap the front side seams over the back, pinning. Be sure you're leaving enough wearing ease (extra fabric to allow for movement) over your bust so that you can move and take the top off! If the overlaps on either side aren't completely even, remove the top and adjust with the top laying flat; a ruler is handy for this. 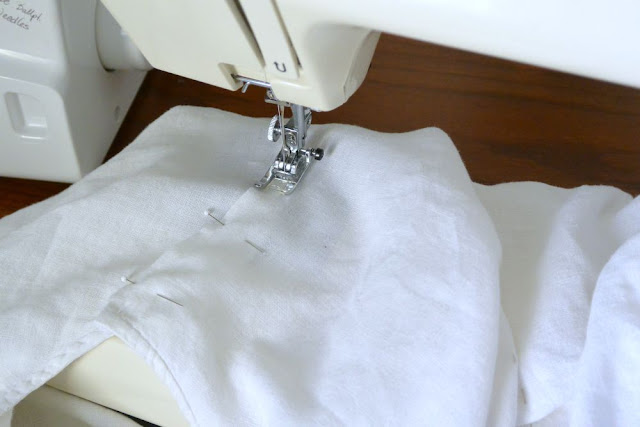 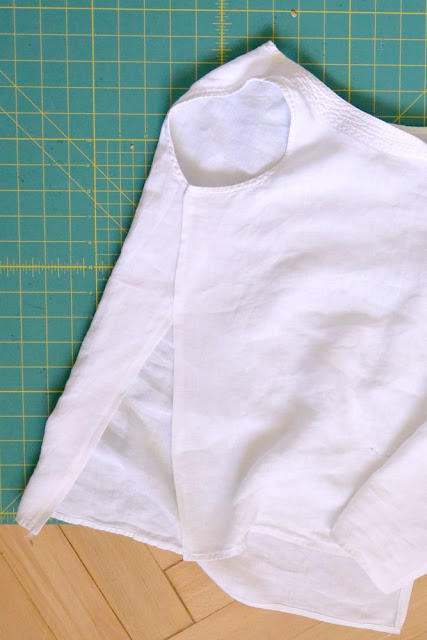 Once you have the overlap neat and even, pin in place through both front and back layers and stitch. Stitching over the hem created a few steps ago will keep this join of invisible! 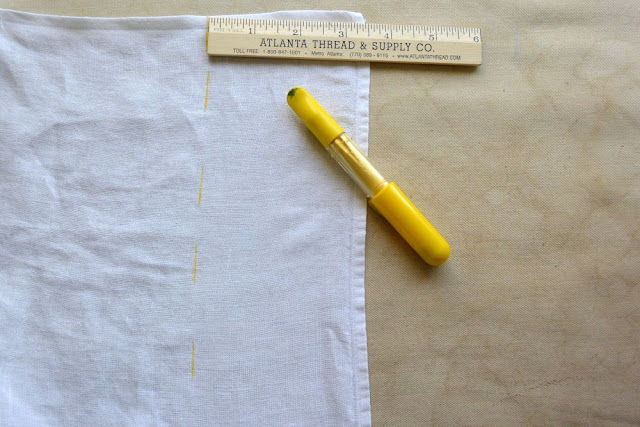 Try on the top again, and determine what length you'd like to crop this top, and mark (and take the top off again... obviously!). Measure from the hem to the mark you made, and subtract 1" for the new hem turn-under. I ended up cutting off 3 1/2" of the length on my top. Measure and mark on the front and the back. If you want the back to be slightly longer (aka "mullet hem"), make the measurement a little less--I took 3" off the back. 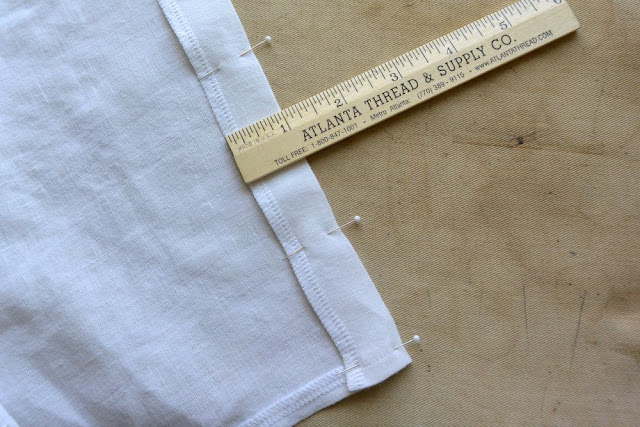 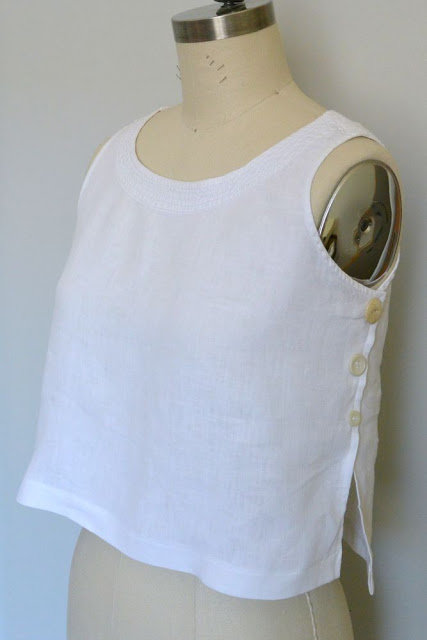 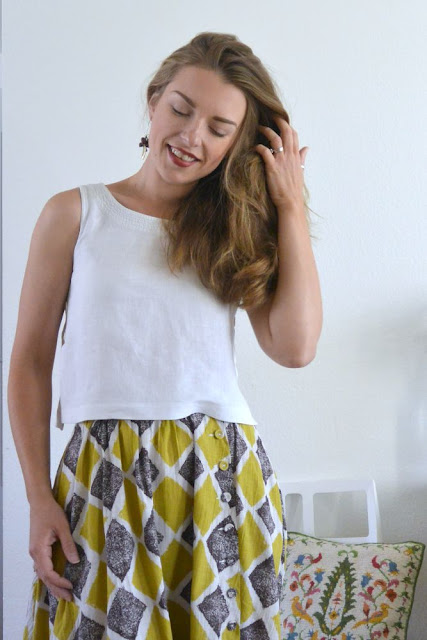 Give the top a final press and you're done! I decided to add buttons to the overlapping side seams for a bit of detail, but that is totally optional (and I get that buttons at the armpits might be a little odd!).