No matter how much I adore delicate vintage blouses, modern tshirts will always have a place in my wardrobe. I hesitated to even blog about this, because there is so much written already about Tasia's Renfrew tshirt pattern. (Which I've had *cough* in my stash since it was initially released. Took me long enough to sew it!) I'm in the middle of trying to perfect this pattern into a tried-and-true (TNT) piece; something I can just pull out and whip up without too much fiddling. I'm a bit obsessed with it right now. Plus I just had a horrible fabric-bomb project (the plaid was horribly off grain. Teaches me not to buy enticing plaids off the clearance table... lol), and I needed something that wasn't going to be a spectacular fail.

Be prepared for me to ramble a bit in this post, as I'm going to delve into some fitting and construction stuff (mostly for my own reference).

Initially I cut out a size 4, grading out to a 6 at the bust and hips. I don't like my tees super tight, so I wanted a more relaxed silhouette. I also omitted the sleeve and hip bands. The sleeve is the long pattern piece, but I forgot to lengthen it to account for leaving off the band! So it's a weird length on my first shirt. Because I am a genius and black photographs so well (note sarcasm! haha), here is my first wearable muslin of the Renfrew (as best as one can make out... it was difficult to get good shots between crummy lighting and a toddler intent on playing with the camera tripod): 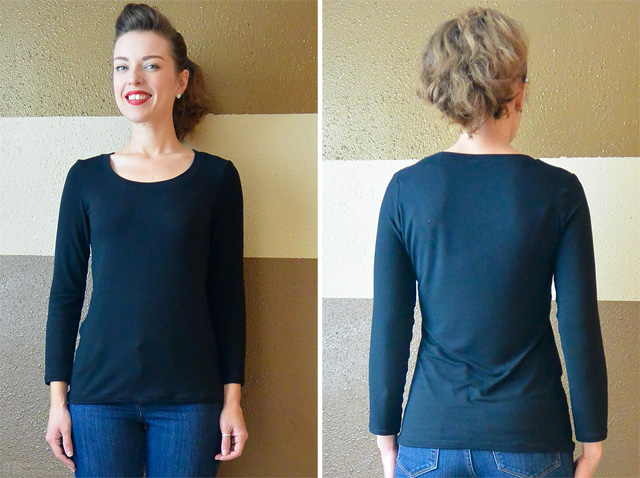 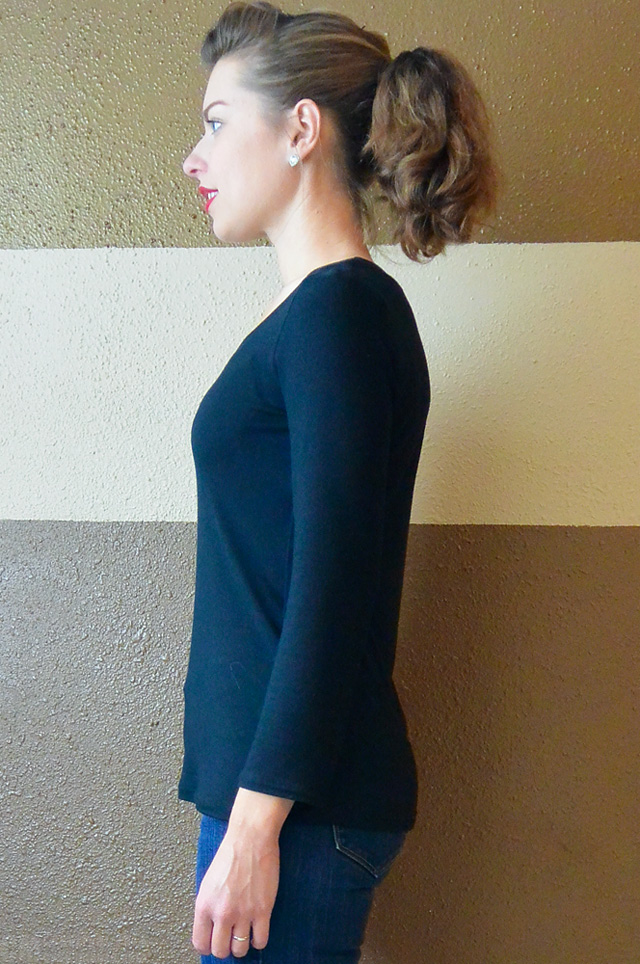 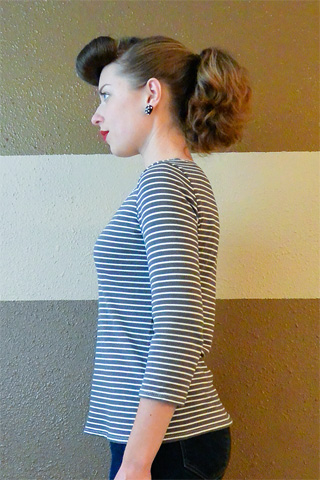 This striped Renfrew is the second version. I used a beautiful bamboo knit I picked up at Finch Sewing Studio earlier this month (ahhhhh! I could live in that shop! So many beautiful sewing supplies!). It's interesting to see how different knits behave: the first was much more forgiving and drapey, while this one has some body and doesn't hide any fitting issues, I would definitely appreciate if anyone had any critique to offer regarding fit; I do like how this second tshirt turned out (and have worn it a handful of times already!)--but the shoulder/sleeve area (and obviously the sway back issue) are bothering me. It's very similar to how all RTW tshirts fit me, but not quite there for a TNT pattern. ;-)

Technical notes: I used a stretch stitch on my Kenmore. Worked beautifully! I like how it looks over zig zag-ing, which is what I've used on knit seams prior.Though I don't need to (knit doesn't fray), I graded/finished the seams on my serger. Gives the insides a more professional finish. The hems were all done with a twin needle; I also hemmed the sleeves before I sewed the side seams. For fitting insight, I referenced the usual suspects: Fit for Real People and Fast Fit. 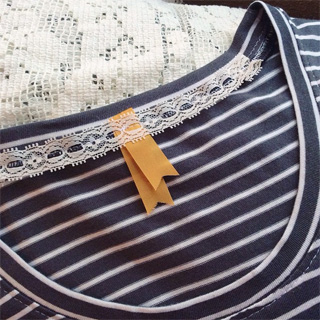 One little addition was something I spotted on an Anthropologie top recently: a small length of lace sewn to the CB neckline. It's caught down in the topstitching from the right side as it's sewn. Its just a little inside detail that I like and just makes me smile. I need to get some new tags made up for myself too--I really love sewing those in my handmades!

So now I have two wearable renditions of Renfrew, and am going to work on correcting the pattern for version 3. I've got a few knits I picked up on super sale (60% off!) at JoAnn's right before the Thanksgiving holiday last week, so might use one of those. Once I get the pattern just right I have plans to hack the pattern into some other tshirt styles I'd like in my wardrobe. But for now, I need to focus on the four pairs of socks I'm knitting for family members for Christmas... Yes--four pairs of socks to finish before the week of Christmas. My sanity may be questioned! lol.

Hope everyone is having a lovely first week of December!
Labels: handcrafting sewing. renfrew